13 Best Things to Do in Dubai

Dubai: A Blend of Heritage and Innovation

From sprawling skyscrapers to centuries-old mosques, from lazy boat rides to high adrenaline endeavours, Dubai is truly a melange of senses and experiences.

The premier holiday hotspot and the business hub of the Middle East, glitzy and glamorous Dubai is on almost travelers’ list of destinations. Known for its desert landscapes, shopping malls and markets, sprawling skyscrapers and giant man-made islands off its coast, Dubai is a melting pot of business and sun-seeking tourism. Apart from the modern, glittering cosmopolis offerings, you can also indulge in other activities encompassing cultural, historical and adventure tours and activities. Here is your ultimate guide to the gem of the Middle East.

13 Best Things to Do in Dubai 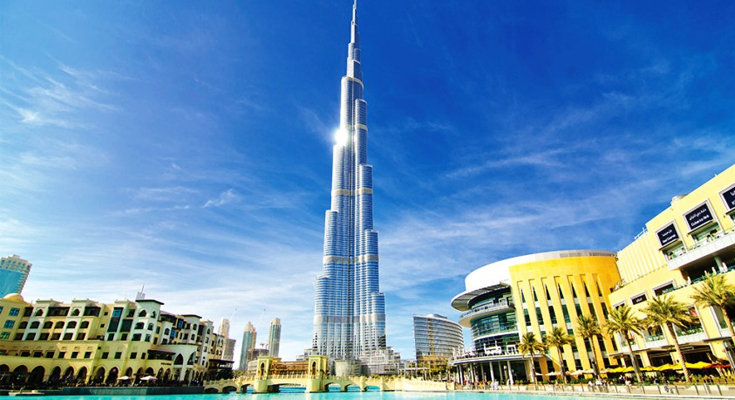 No article talking about Dubai can begin without the mention of Burj Khalifa, the tallest structure ever built on the planet. Elevated at a height of 2,717 ft, the colossal structure is an architectural marvel that houses several of the city’s best hotels and restaurants. It also has two observation decks that offer you a bird’s eye view of the city skyline. Nighttime visits are popular among visitors as it offers unforgettable views of the glittering city below. The skyscraper is surrounded by the Burj Khalifa Park and the Burj Khalifa lake, which accommodates the Dubai fountain. Tourists can enjoy a spectacular musical show at the Dubai Fountain, and shop to their heart’s content at the Dubai Mall, the largest mall in the world. The Burj Khalifa also boasts of some of the city’s most premiere fine dining destinations such as At.mosphere, the world’s highest restaurant serving an array of global cuisines. The skyscraper is also home to the Armani Hotel, designed and developed by legendary designer Giorgio Armani. 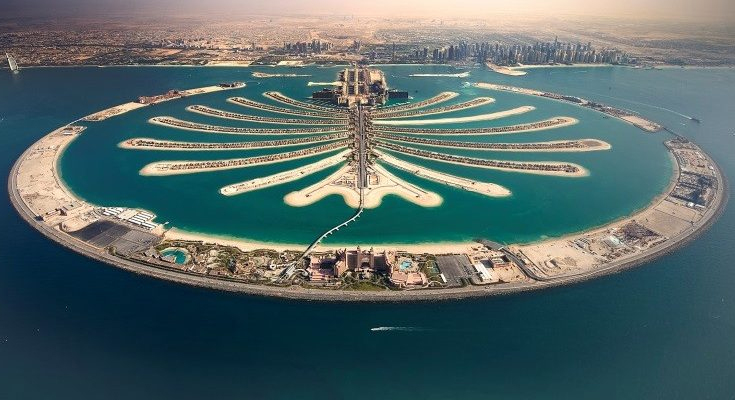 The Palm Jumeirah is the world’s largest man-made island jetting out into the Arabian Gulf. An extraordinary feat of engineering and architecture, the islands, shaped like a palm tree, are so massive, that it can be viewed from space. With a massive size and ample attractions to keep you busy. Divided into 4 major parts - the Crescent, Spine, Trunk and Fronds, the islands are dotted with luxury hotels, upmarket restaurants and residential spaces, lavish resorts, beach clubs and bars and high-end retail spaces. You can get around the palm either by availing cabs or using the Palm monorail system that runs from the base of the trunk to the Atlantis Hotel at the top of the palm on the Crescent. 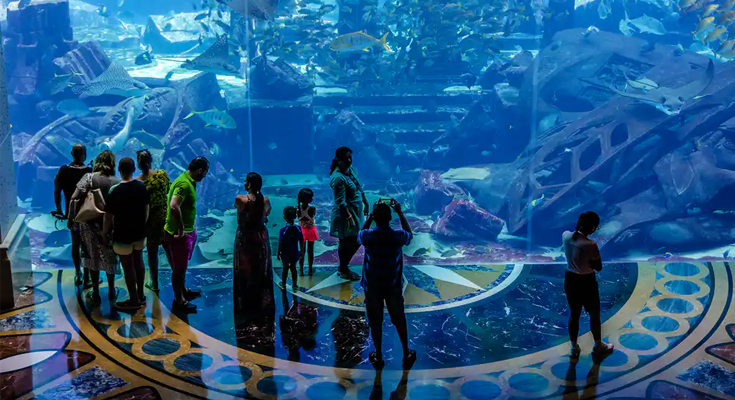 There are ample options for thrilling entertainment on the Palm Jumeirah. The Aquaventure Waterpark at the Atlantis houses over 30 thrilling water slides, including one where you slide through a shark tank. There are also attractions such as the Dolphin Bay, where you can kick back with some of the most intelligent creatures on Earth. The Lost Chambers Aquarium, another key attraction of the water park, gives you a chance to witness over 65,000 marine animals swimming in the Ambassador Lagoon. The 11 million litre aquarium is home to a plethora of sharks, sea lions, manta rays and colourful fishes. You can also go snorkelling and diving in the lagoon and get up close and personal with the creatures of the deep. You can also enjoy the serenity of the underwater without getting your feet wet with fish-tale tours and underwater yoga.

4. Skydiving over the Palm 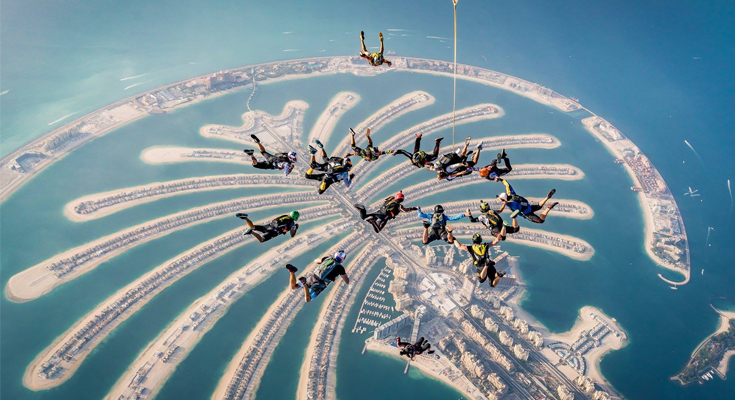 The unknown depths are not the only thrilling experiences offered at the Palm. The sky is literally the last frontier on this island for thrill-seeking travellers. At Skydive Dubai, you witness the incredible islands, the Dubai Marina and its surroundings while in freefall. After a small introductory session, you can dive out of an aeroplane from over 35,000 ft at the premium Palm Dropzone. An adrenaline-pumping experience with surreal views of Dubai and the Arabian Gulf, skydiving has become one of the most sought after experiences in the city since its inception. 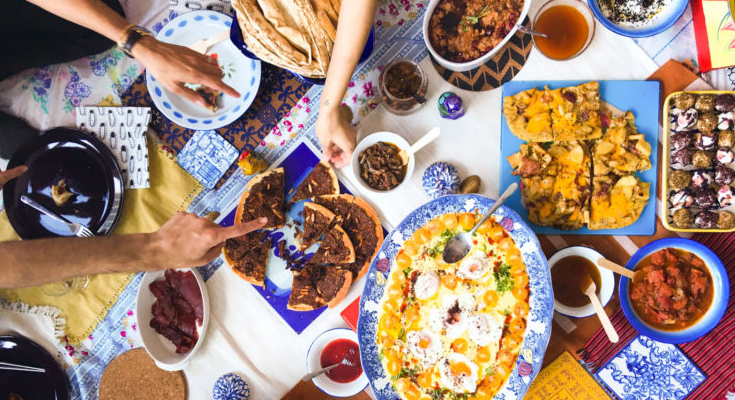 In Dubai, with its cosmopolitan culture and population, you can truly experience the world on your platter. This is true even in the Palm Jumeirah, dotted with eateries and restaurants serving up authentic feasts and cuisines from around the globe. Nobu is one of the most prominent restaurants in the Palm, known for infusing traditional Japanese and South American cooking techniques. The Ibn al Bahr is the place to visit if you’re in the mood for some scrumptious seafood. The 101 Dining Lounge Bar and Social by Heinz Beck offer a luxury, fine dining experience, crafted by Michelin starred chefs. There are also a variety of other luxury restaurants serving up cuisines from East Asia, India, Europe and the Americas.

6. The World’s Most Luxurious Spa Treatment

The Talise Ottoman Spa, one of the most lavish spas in Dubai, offers a host of pampering experiences such as the Coffee Peeling Treatment, where you rubbed and buffed with Turkish Coffee. You can also indulge in the ‘world’s most luxurious spa experience’ which includes a 24 karat gold mask, rose bath and a diamond body ritual. It also includes an overnight stay and a caviar lunch with champagne. 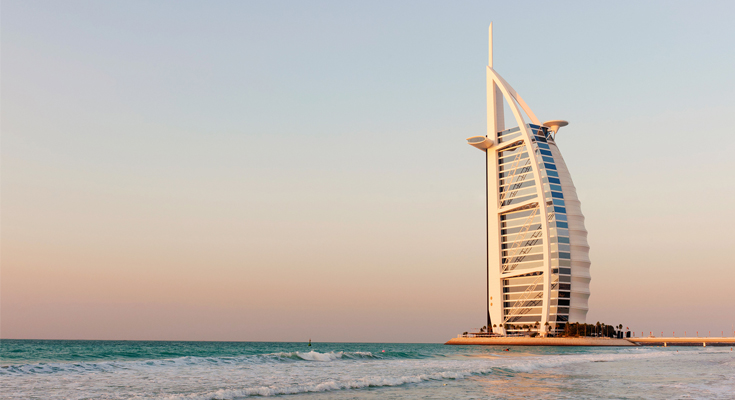 One of Dubai’s most iconic landmarks and one of the most prestigious hotels, the Burj Al Arab, is on an artificial island off the shore of the Jumeirah Beach. Designed in the shape of a dhow - a traditional sailing vessel used extensively in the Red Sea and standing at a towering 321 metres, the structure has become a symbol of modern Dubai. The hotel houses nine different restaurants, but prior registration is required if you are not staying in the hotel. If you opt to stay at the Burj Al Arab, you will be pampered with luxury and opulence, including a complimentary pickup service by a chauffeur-driven Rolls Royce or a helicopter ride. The interiors are adorned with real gold, and the colour palette and design elements were specifically chosen to highlight the history of the Arabian Peninsula. With one of the largest atriums in the world, the Burj Al Arab has rightly found its place as one of the world’s most extravagant hotels. 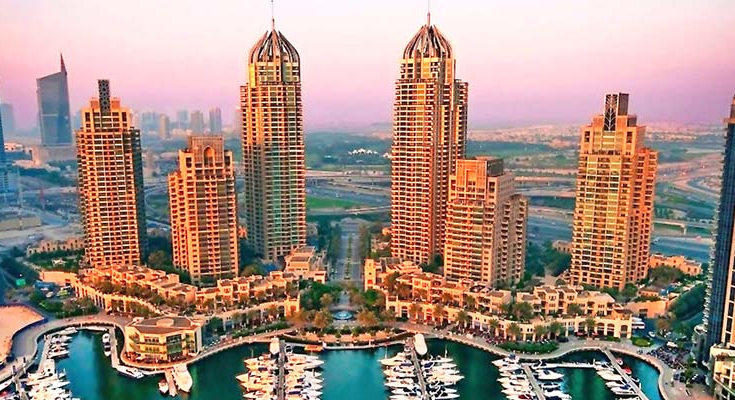 The biggest man-made marina on the planet, this stretch of pristine sand overlooking the Persian Gulf, is one of the most exclusive and affluent neighbourhoods in Dubai. The residential towers housing the mostly expat population are some of the world’s tallest condominium structures. Lining the shore are broad walkways dotted with palm trees, perfect for a quiet stroll. There are two primary beaches in the marina - The Beach and the Beach at Jumeirah Beach Residence. With eateries, boutiques, clubs and markets, the artificial canal city is one of the trendiest blocks in the city among locals and tourists. 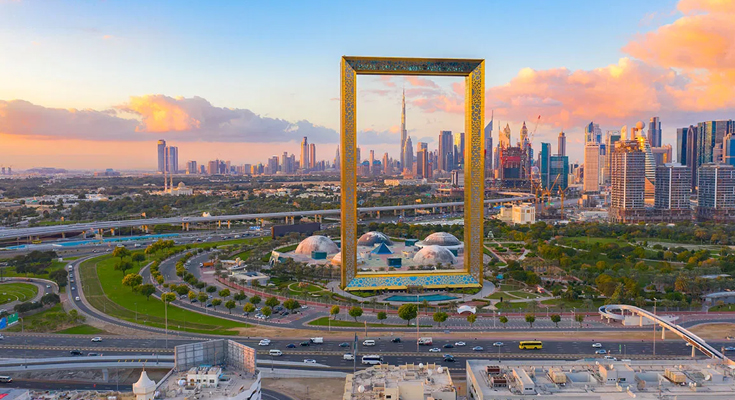 A futuristic landmark bang in the middle of downtown Dubai, the Dubai Frame metaphorically frames out the past and the present. Constructed to represent the amazing transformation of Dubai since the 1990s, the structure offers awe-inspiring views of both the old and new areas of the city. Dubai’s transformation is also represented by pictorial depictions and animations. There is also a skywalk with a glass floor at the height of nearly 105 metres for the few daring ones who aren’t afraid of scaling new heights. By night, the Dubai Frame is lit up, adding yet another magnificent sight on the city skyline. 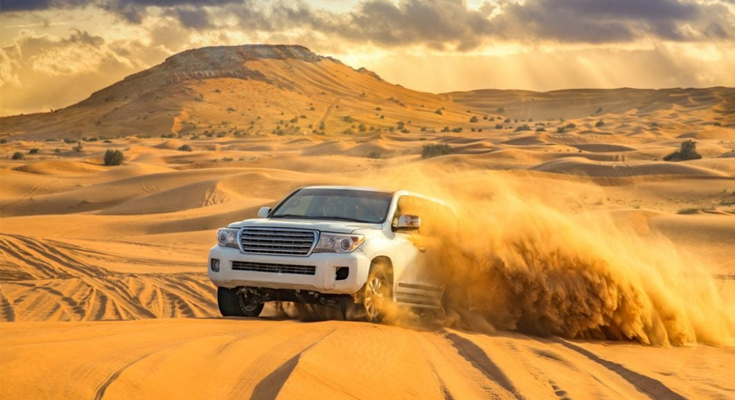 Apart from the luxurious skyscrapers, Dubai is also known for its adventurous streak. At its heart, Dubai, where the desolate desert meets the rich ocean. No trip to Dubai is complete without exploring the endless Arabian desert. The Dubai Desert Safari is a very popular attraction among tourists of all ages. Starting with a dune drive across the desert, you can go dune bashing, quad biking, tour camel farms and go for a camel ride. As you gaze upon a breathtaking sunset on the horizon, feast your eyes on traditional performances while enjoying a lip-smacking Arabian feast under the starlit sky. The desert safari is an indulgence where you and your loved ones can experience an authentic Arabian night. The Dubai Creek is a saltwater creek and one of the major trading ports of UAE, that separates the city into two major sections - Deira and Bur Dubai. Stretching from the Persian Gulf to the Ras Al Khor Wildlife Sanctuary, the waterway also attracts tourists and facilitates trade and other commercial activities. Also known as the River Zara, the shoreline is a perfect fusion of traditional and modern architecture. The Dubai Creek is one of the most happening places at night as often there are several live shows, music, plays and grand displays of firecrackers. A small body of water that separates the desert from the trading port, the Dubai Creek is one of the city’s offerings you cannot afford to miss. 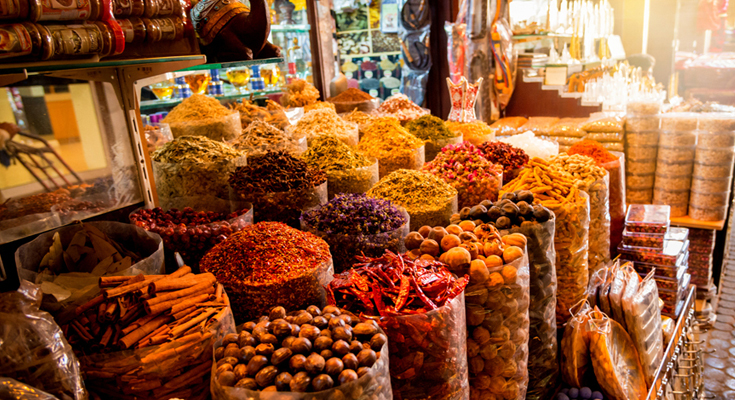 Dubai has slowly become one of the most premier shopping destinations in the world. While the massive malls are widely known and talked about, there are also traditional markets or souks that can easily give state-of-the-art malls a run for their money. The Dubai Spice Souk is a famous market at Deira, known for its vibrant and aromatic atmosphere. Home to about 200 retailers selling an assortment of exotic spices, the market is flocked by locals and tourists alike. From kitchen spices to medicinal herbs, incense burners to dry fruits, the spice souk has it all. From staples such as cinnamon sticks, Sichuan peppercorn, cardamom and coriander, to exotic choices such as ancient orange peel, dried cucumbers and preserved lemon, there is a lot to discover in this market. The spice souk is also home to traders who deal in Arabian spices such as sesame seeds, sumac and saffron. Unlike the malls in the downtown area, the traders of the souks are open to bargaining, and you truly feel you have stepped into Middle Eastern wonderland, with colourful sights and alluring aromas. 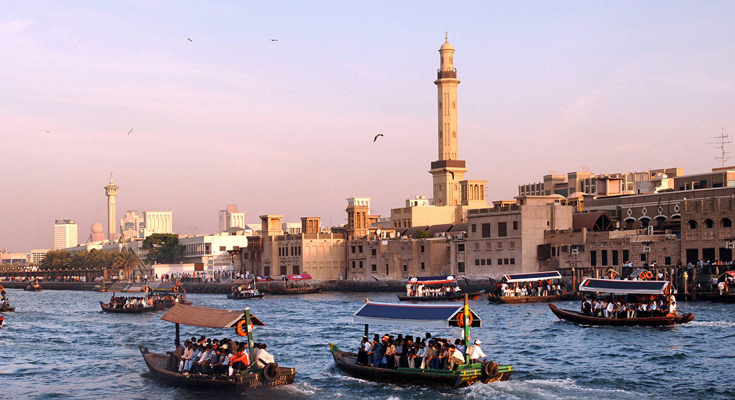 The Al Fahidi Historical District, more commonly known as Ak Bastakiya or Old Dubai, is a treasure trove that holds the memories of times long gone. Before the discovery of oil in the middle east, the area was ruled over by sheikhs, and inhabited by bedouins engaged in date farming, herding and fisheries. Throughout its history, the port city has been known for its pearls and as a pit stop along the different trade routes such as the Persian routes to Rome, the Silk Road to China and the British Spice Route to India. The tight, winding roads and colourful houses made of coral, mud and palm wood, the Al Bastakiya district is a standing testament to the humble beginnings of Dubai as a sleepy desert port.

A modern metropolis with humble beginnings, Dubai has come a long way to become one of the most sought after tourist destinations in the world. With an array of attractions that appeal to travellers of all ages, Dubai is all set to welcome and accommodate you.