Get the Party started at the New Year Destinations of 2022

Despite restrictions, the party goes on at the newest New Year hotspots around the world.

We have seen countless photos of New Year celebrations from party hotspots such as Rio de Janeiro, Sydney and Tokyo. Each year, these premier destinations usher in the festivities with a grand display of fireworks and celebrations that leave travellers mesmerised. This year, travel restrictions and social distancing measures have put a dent in the party plans. Even if you can reach these premium spots, you’d probably have to break the bank to take part in the festivities. Thankfully there are many cities that throw equally enthralling parties, which are safe and open for travel. This year, move over the big names and party with panache at lesser-known havens of festive celebrations. 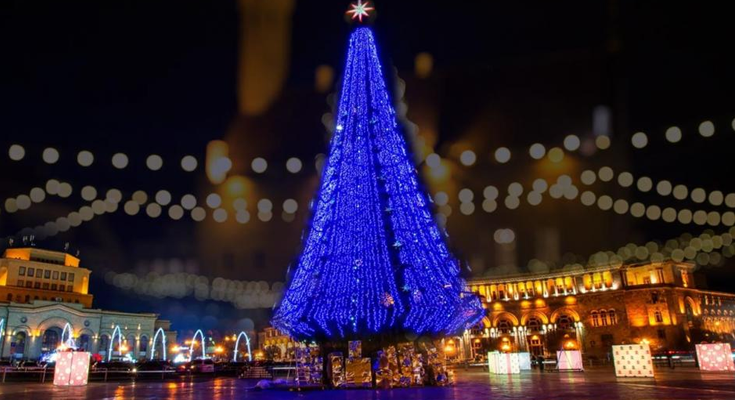 The festive spirit grips Yerevan from the start of December and decorations can be seen in the entire city. The city is lined with several Christmas trees and a main, big tree stands at the Republic Square, at the heart of the city. Swan Lake, close to Republic Square, is another lively place to visit. Enjoy local food and drinks while listening to live music and watching people ice skate on the frozen lake. Or put on a pair of skates and go skating yourself. Witness a pomegranate blessing ceremony in one of the churches in the city. Apart from these, there are plenty of clubs, pubs and bars in the city to let your hair down while sipping on local brews. 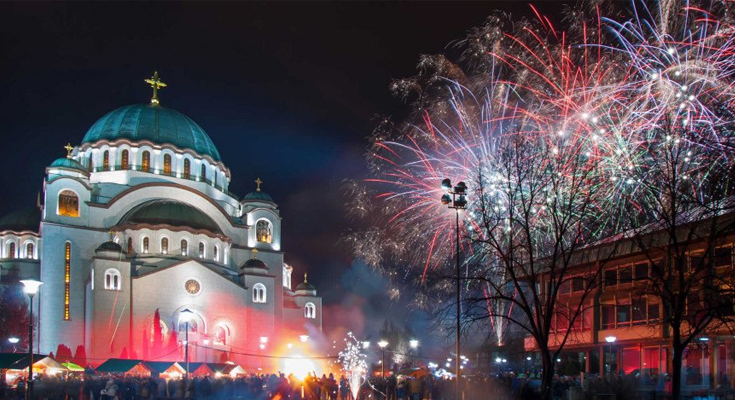 New Year Celebrations in the capital of Serbia seem to bring out nearly all of its residents and visitors to the party. The parties generally start late and go long into the night. The countdown to midnight is the start of the fun. Belgrade is known for its nightlife - strings of clubs and pubs on barges along the rivers Sava and the Danube. These barges come alive during the new year celebrations with locals and tourists thronging their decks to groove to the music while drinking drafts. Because of the cold winter, locals also throw massive house parties. This intimate experience will show you the fun side of the Serbs and you can quit the queues. Though the Serbian winter is incredibly harsh, the festive warmth of Belgrade more than makes up for it. 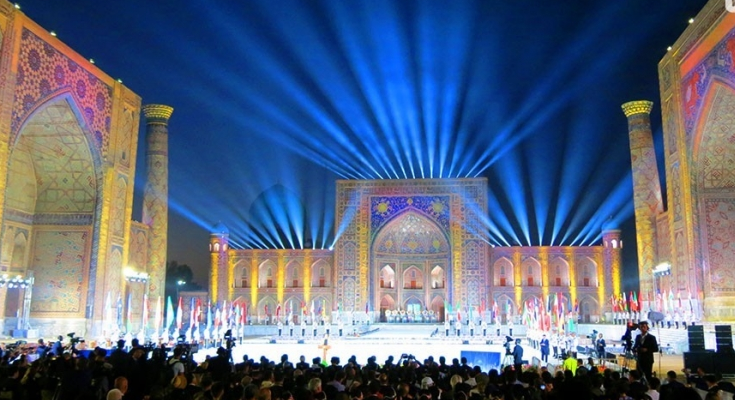 The New Year has been a major festival in Uzbekistan since the Soviet era. And Tashkent is the hub of the new year celebrations and parties. A huge, dazzling Christmas tree is put up at the Independence Square where people gather for live music, good food and occasionally, the sight of snowfall. The theatres, cafes and restaurants in the city also have special events during the festivities. The Tashkent Circus treats its visitors with a special program and the Alisher Navoi Theater presents a special Winter Tales performance. The theatre also hosts several ballet and opera performances during the festive season and it is a great opportunity to listen to classical music performed on traditional Uzbek instruments. A different kind of celebration, Tashkent is a treat for those who want to start their new year with a twist.

4. Lviv and the Carpathian Mountains, Ukraine 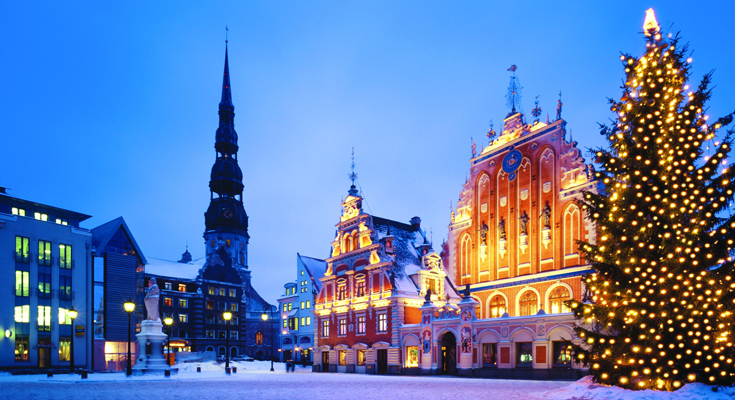 The Ukrainian Carpathians are the busiest during Christmas and New Year. Hundreds of colorful kobylas (traditional Carpathian houses) dot the snow-covered landscape and traditional Christmas celebrations can be seen at every corner. You can go skiing on the slopes, explore the winter forests and warm up by fireplaces. On New Years Eve, there are grand celebrations with traditional Ukrainian meals and colourful folk festivals.

A few hours north of the Carpathians lie the city of Lviv, another Ukrainian destination for the new year. The city is adorned with festive decorations and many Christmas markets are set up, where you can taste traditional delicacies of Lviv and drink mulled wine. Centuries-old Christmas traditions such as the installation of the didukh, a five-meter tree-shaped sheaf of wheat. You can also visit the City Doughnut Festival and the Vertep Parade, which draws locals and tourists in huge numbers.

An impressive display of fireworks, Dubai is high on the list of places to be during the New Year. With some of the highest buildings in the world, there are plenty of places to kick back with your favourite beverages and watch the skies light up. If you’re not big into heights, you can also go cruising around the Dubai Marina and the Persian Gulf during the fireworks. There is no dearth of options when it comes to food and beverages in this city. There are also plenty of parties with djs, who will get you grooving in an instant. Like everything in Dubai, the New Year celebrations are synonymous with luxury and grandeur and the party vibes stay with you long after its over. 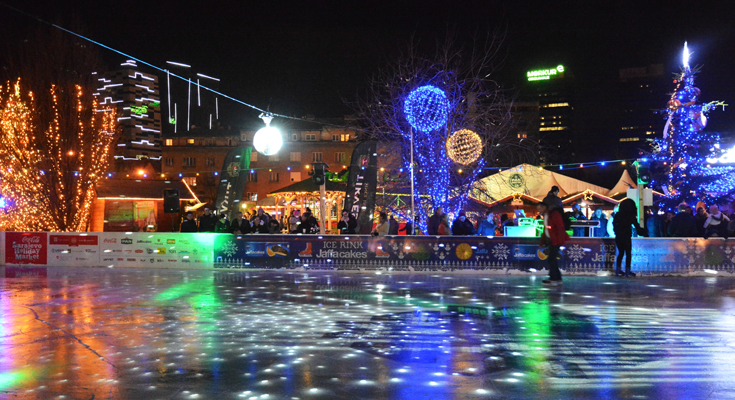 The main square of Trg Djece Sarajevo is decked up and the main celebrations take place here. There are various live music performances starting around 9. Fireworks light up the sky as the clock strikes midnight. There are several pubs and clubs that serve different kinds of food and beverages. The party goes on till the sun rises the next day. Blidinje National Park, a few hours west of Sarajevo is also a great place to unwind on the new year. Live music on the mountainous ski slopes along with live music, barbeques and drinks make it a new year experience like no other. 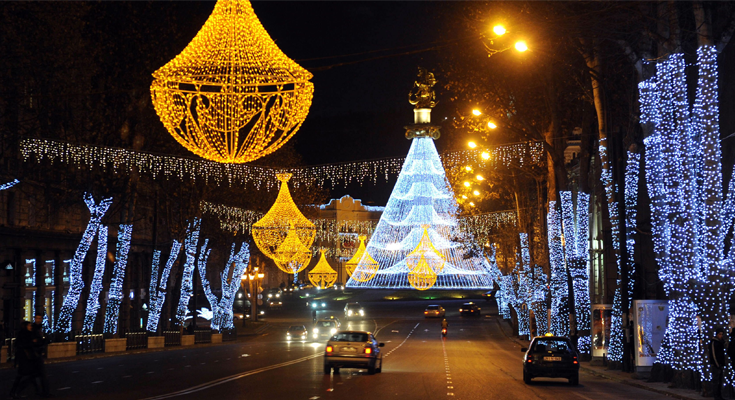 From the start of December, every street of Tbilisi is decorated with lights of different patterns. The markets become livelier with Christmas shopping in full swing. Live musical performances are held each day at a stage set up in the middle of town. Even Shakira has been rumoured to have performed in Tbilisi during the festivities. The new year is marked by a massive fireworks display, much like those of Hong Kong or Paris. Of course, there is an abundance of pubs and clubs where you can go partying as well. Christmas and New Year celebrations are huge in Tbilisi. A place filled with live music, a cacophony of cheerful people and lively vibes make the Georgian City of Lights an awesome place to welcome the new year. 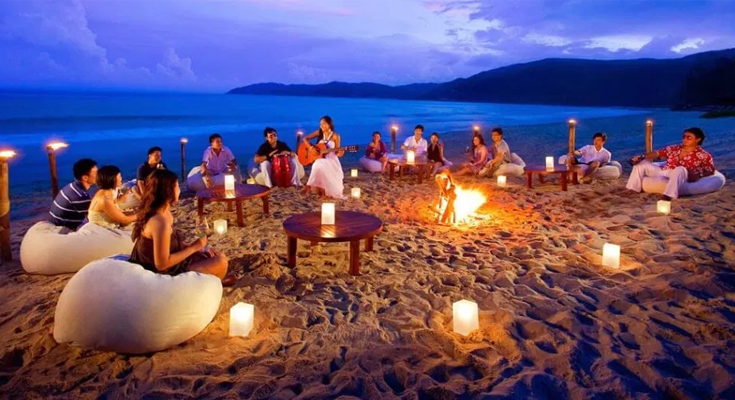 The party hub of India, Goa is filled with bars, pubs and nightclubs that host exclusive parties during the New Year. There are also swanky music festivals featuring international DJs, boat parties and beach parties all throughout December and January. The beaches and the churches are decked up with glittering lights and fireworks shows are common in all the major beaches such as Anjuna, Calangute, Vagator and Palolem. If you’re travelling with your better half, there is nothing more romantic than launching a sky lantern together. If you’re with your friends, go berserk at one of the famous clubs of EDM festivals. Or if you find yourself travelling with your family, attend the midnight mass and witness the Burning of the Old Man, a traditional spectacle you can experience at any Goan coastal village.