Plan your trip with our customized Baltic tour packages 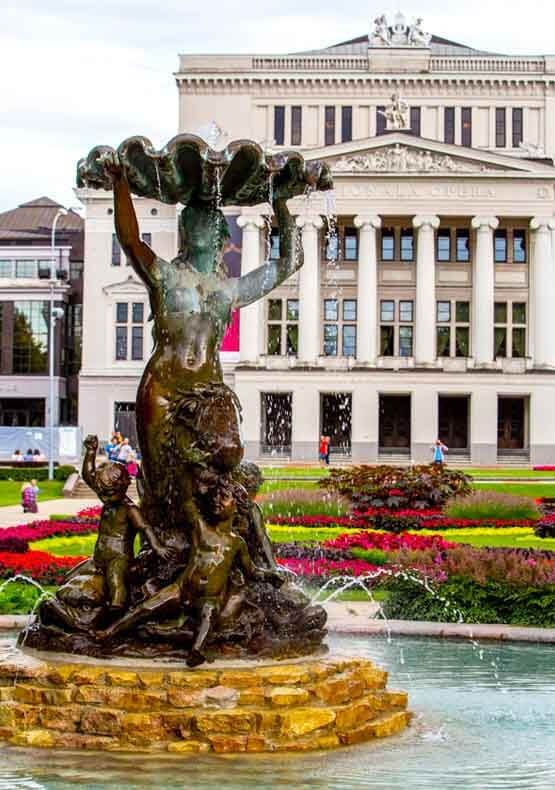 About Baltic: An Overview

The group of countries that have shorelines along the Baltic Sea - Denmark, Estonia, Latvia, Finland, Germany, Lithuania, Poland, Russia and Sweden, presently referred to as Baltic states, also known as Baltic Countries - Estonia, Latvia and Lithuania, the constituent republics of the former Soviet Union. Estonia is a democratic, parliamentary republic consisting of 15 counties with over 1500 islands and capital in Tallinn, the largest city. Latvia is in between Estonia to the north, Russia to the east and Lithuania to the south and the capital, Riga is the biggest city in the Baltic States. In Estonia and Latvia, outside the major cities, there is no horizon without forests. Lithuania also has a parliamentary democracy. In its south, the forests open to broad plains that extend to east through Ukraine to Russia and Central Asia and Poland and Belarus to the south.

In the north-eastern region of Europe, the Baltic countries, also known as Baltic States, include Latvia, Lithuania and Estonia on the eastern shores of Baltic Sea. Baltic countries gained independence from the Russian Empire in the wake of World War I. Geographically; Estonia is on the north-eastern edge of the European Union, bordering Russia and Latvia. Latvia is a democratic, parliamentary republic with population of 2.1 million. Today Latvia is a member of both the European Union and North Atlantic Treaty Organization (NATO). Lithuania was the first Soviet republic to declare independence from the USSR. Today Lithuania is a member of NATO, the Council of Europe and the European Union.

Two monastic orders of warrior monks, the Teutonic Knights and the Sword Brothers in the 12th century, moved into the Baltics. The curtain rises here and the written history begins. The Sword Brothers founded Riga in 1201 and restrained the surrounding tribes, Christianizing them with fire and sword. They later moved north and took over Estonia. This was a key juncture in Baltic history. Estonia and Latvia were set rule for many centuries by the Baltic Germans, who emerged from the monastic orders as the ruling class.

After hundreds of years of German colonization and numerous wars of conquest, the Baltic States of Estonia, Latvia and Lithuania are flourishing. Even if Lithuania, Latvia and Estonia are grouped together geographically as the Baltic Region, they differ culturally and linguistically from one another, but constantly endeavour to see them as unique nations.

Lithuania's culture has been greatly influenced by Poland and the capital, Vilnius, a centre of Jewish learning till the Nazi years. Latvia is diverse and Russian-influenced and Estonia sees itself as a European country, indeed Scandinavian.

As far as language is concerned, both Lithuanians and Latvians share similarities, though they are not commonly lucid, Lithuanian, more conservative of the two. Meanwhile, the Estonian language derives from the Finno-Ugric branch of the language tree, making it entirely different from both.

Festivals and markets year-round also highlight unique elements of each nation's culture and history through folk dances, songs, crafts and food. Countries in the Baltic Region also celebrates holidays according to local customs. Christmas in Lithuania is similar to Christmas in Eastern Europe, definitely unique, with many special customs and traditions of its own.

The climate of the Baltic States is greatly influenced by the Baltic Sea and Gulf of Finland. All coastal areas have temperate maritime climate - comparatively mild winters with average temperatures in January in Tallinn -4.7 C, Riga -3.8 C, Klaipeda 2.1 C and in July Tallinn 15.5 C, Riga 16.9 C, Klaipeda 19.4 C. Every season in Baltics has its advantages.

Average Temperatures in Baltic Sea differ significantly. Considering humidity, temperatures feel cold half of the year and pleasant with precipitation, for the rest. The hottest months are July, August and then June.

Baltic tourism offers sights and activities which are not found in other countries in East or East Central Europe. The capital cities offer maximum entertainment, sights and shopping go, but a trek into the countryside will mean the exploration of castle ruins, enjoying a day at an open-air museum, or spending a revitalizing holiday by the sea.

Historic churches, cobblestone streets, palaces, museums and galleries dive into the cultural world of Tallinn, Estonia. It is a small capital, however packed with sightseeing. Riga, the capital of Latvia has been influenced a lot by the German culture, very different from Vilnius or Tallinn. Vilnius, the capital city of Lithuania boasts of the Old Town protected by UNESCO and an abundance of architectural landmarks, cultural venues and dining outlets. AHHAA Science Centre, Tartu, Estonia is the biggest science centre in the Baltic States, which offers various exhibitions, workshops, planetarium and theatre shows.

The Hill of Crosses in Lithuania is the pilgrimage site with a mysterious history. Today it features thousands of crosses and rosaries, left by the pilgrims and visitors. Jurmala, Latvia is the ice blue water of the Baltic Sea might be the prettiest of all the three states. Narva Castle, Estonia is the most popular attraction, hosts a museum, helps learning about the country and its historic past. The Curonian Spit, Lithuania is one of the most impressive and popular natural wonders in the country.

Experience the Best of Baltic Tours

Riga, the capital city of Latvia, is a busy port with a well-preserved, Old Town offering rich architectural setting. The capital hosts over 800 masterpieces of Art Nouveau architecture and some quality sights. Recently, it has developed better tourist services including new air connections, attracting British, German and Scandinavian tourists. A short drive away from the capital stands Latvian resort - Jurmala. Beaches and loads of spa make Jurmala, one of the most popular cities to visit in Latvia. Ventspils is a port city and Kuldiga is another top destination on the list of most popular cities to visit in Latvia.

Lithuania inhabited by people of Baltic descent was once a powerful empire stretching from Baltic Sea to Black Sea. Nowadays, it is known for its history, beautiful nature and friendly, welcoming people with one of the capitals in Europe - Vilnius which is still undiscovered by mass tourism.

There are plenty of other sights than the city, like national parks abundant with lakes and rivers, the Baltic Sea coast with its striking sand dunes and unexplored villages, an unspoiled coastline, and a wide choice of international and local hotels and restaurants. There are all sorts of festivals starting from classic, jazz and theatre to folk festivals and marvellous craft fairs.

Once home to pirates, conquered by Russia, and freed by the collapse of the Soviet Union, Lithuania, Latvia and Estonia welcome travellers wholeheartedly. This trip explores the highlights of Estonia, Latvia and Lithuania in about two weeks. Close to Riga, the capital city of Latvia is Jurmala, Latvia's Riviera-like resort with beaches, wooden villas, spas and therapeutic facilities.

A visitor shouldn’t miss the historic towns of Cesis and Sigulda with their medieval castles, along the banks of Gauja River while travelling through Gauja National Park. The 18th century Rundale Palace not far from Latvian - Lithuanian border is considered to be the most impressive Baroque building in Latvia.

The countryside, national parks and coastal areas of these countries are stunning, adding a touch of wilderness to the history and culture of the cities and towns while journeying from Tallinn to Vilnius. With street art, sculpture, incredible architecture and fascinating historical sites, this trip is simply culturally rich.

Close to Vilnius, is the fascinating 15th century Trakai Castle, a monument to the past glory of medieval Lithuania. The biggest city after Vilnius to visit is Kaunas, the interim capital between the two World Wars. It has the charm of a former era mixed with contemporary culture that hosts several museums.

The most familiar Tallinn highlights are the Fat Margaret Tower, the Great Coastal Gate and the city wall with defensive towers on the way to the Upper Town.

The diverse cultures of Latvia, Estonia and Lithuania, now set to seek footsteps of Indian tourists and some fresh investments in hotels, other businesses from India. The natural beauty, green environment, cultural diversity, lakes, sea and forests attract more Indians to come to the Baltic nation.

Dook not only recommends travel packages but also advices a visitor to the Baltic area to understand and experience the rapid changes that have taken place in this part of the world. The guides Dook provides can all speak English and variety of European languages, own native languages in addition as well.

Baltics travel is an interesting option for those looking to venture into Eastern Europe.

When to Go: March to May and September to October are the majorly recommended months to get good weather, avoiding tourist crowds. However, the best time is in the high season months of June to August.

Currency: Euro is used all through the Baltic countries unlike travelling in the Balkans or through Central Europe.

Transportation: While trains do exist for some routes, generally, it is more convenient to use buses when travelling in between Baltic countries.

Accommodation: There is lack of hostels outside the bigger cities; however other budget accommodations are available.

Language: Latvian and Lithuanian speak Indo-European languages that share similarities while Estonian is more closely related to Finnish. Russian is the second language.

Cuisine: Baltic food is diverse and plenty of dishes are similar to other Eastern European countries

Safety: Baltic’s travel is safe, but advisable to be cautious of walking beneath icicles if travelling in winter.

Every season in Baltics has its advantages. Winters offer cross country skiing possibilities as in Southern Estonia hilly landscape, snow is available when the snow is poor everywhere. Hotels with low season price offers and plenty of interesting cultural events worth visiting.

Springs are almost the best time to visit Baltics. May is the best time to see nature - flowers blooming and this light green colour of spring is something much different from the one in summer.

Summers in the Baltics are mostly mild with the average temperature of +15 until +25 C. June and August are chillier while July often with +30 C.

Autumn is very pleasant and warm with September, gardens full of fruits and forests full of mushrooms. October becomes rich in colours with sunny and mild weather. October and the beginning of November are perfect for migratory bird watching.